skip to main | skip to sidebar

I was struck by an odd (to my ear) phrasing by Richard Gere is a preview for what looks to be a terrible romantic comedy/drama: "Any man is a fool who doesn't appreciate you." I'm sure I've heard this construction before, but it definitely rubs me the wrong way. The problem is the isolation of the relative clause from the NP it modifies. I would always phrase such a thought as "Any X who X is X." Searching for "any * is * who *" on Google returns several hits of the same phrasing, so clearly it's not a rare construction. After careful consideration, I'm unable to make heads nor tails of it syntactically. The incorrect interpretation would be the following: 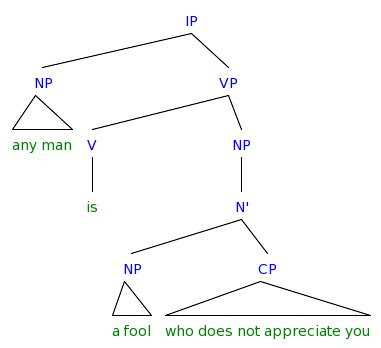 With "any" the interpretation doesn't make much sense, but replace it with "every" and there could be real ambiguity, at least in print. The only way I could see generating kind of construction syntactically is some sort of movement, where the CP starts out under the NP "any man" and then moves lower down. This is also a good example of the cognitive preference for low attachment, i.e., we want the CP "who does not appreciate you" to be attached to the lower NP, not the higher one the speaker wants us to attach it to.
Posted by Ryan Denzer-King at 10:52 PM

This construction goes by the name of "Extraposition from NP" in the GS literature; it extracts a heavy constituent (typically a relative clause) from inside a complex NP (in the sense of the Complex NP Constraint, see Ross Constraints) and extraposes it to the end of the sentence. The input in this case would be
Any man who doesn't appreciate you is a fool.
Extraposition from NP is functionally like regular Extraposition in moving heavy constituents to a right-branching end position, but unlike it in moving from inside a complement, instead of moving the whole complement, and in not leaving a dummy (like it). As you noticed, it's rather marked, and the literature is contentious about its grammaticality as a construction.